Yesterday we covered how the Tribune generally fails to cover the local news. Maintaining that proud tradition, today their page 2 piece is on breadsticks while another columnist waxed poetically about Radio Shack on page 3. At least we’re spared Kass on Tuesdays. If I have to avoid reading one more column on just on how heinous the President really is, I’m gonna hurl.
All that said, it can get worse – much worse – as the Daily Herald just went out of their way to prove.
Though I hate to regurgitate this kind of abject BS, if things are going to make any sense here, we must note that a former Carpentersville resident was just arrested in Mississippi and charged with the murder of his five children, ages one to eight, in South Carolina.
Though this kind of morbidly voyeuristic coverage is not nearly relegated to the DH, I would love for someone – anyone – to explain how this kind of far from random tragedy is actually news. 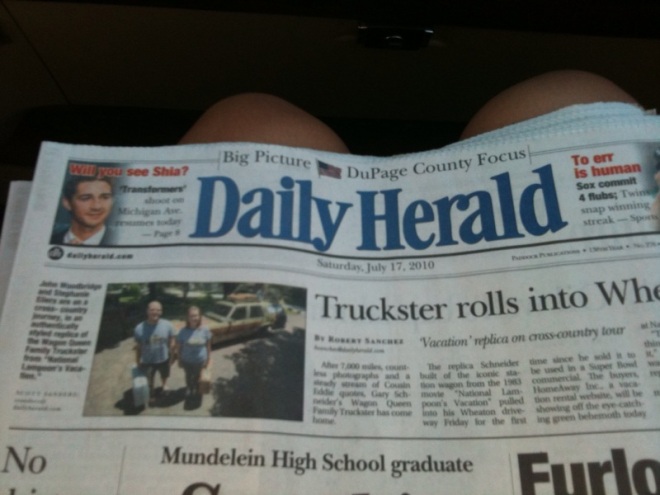 The fact that newspapers choose to normalize this aberrant behavior by insistently covering the aftermath of every mentally ill or deluded individual who finally goes off the deep end, says far more about the managing editors than it does about the criminals.
It’s not news when a mother drowns her kids. It’s not news when some moron who, unable to cope with his own shortcomings, goes on a shooting spree. It’s not news when a father takes out his entire family.
What is news is, having faced down and surmounted the vast array of challenges and stresses that permeate this often difficult existence, the vast majority of folks who somehow manage to persevere and make a better life for their kids.
But not only did the DH cover this non-local tragedy, they took it an absurd step further by going out of their way to make it local. This, of course, begs the question, who, in their right journalistic mind would seek out this assassin’s former roommates just to obtain their expert opinion on his character?
Short of a mental illness, is there really any doubt as to the disposition of someone who just murdered five of his own children? It’s not one of life’s great mysteries.
And what the hell did the DH think these two geniuses were gonna say? “Yeah! We weren’t the least bit surprised by it! The three of us used to go out, get tanked, and beat the crap out of hookers. And that was on a good day! We had an office pool on exactly when this guy was gonna go off and Frank is pretty excited about winning the 150 bucks!”
Of course, one roommate said “He fooled us,” while the other concluded, “I don’t think he should make it out of prison. It’s pretty heinous stuff.”
No shit!
That’s going out on a limb. Did we really need two regular guys from Carpentersville to confirm this guy probably shouldn’t be walking the streets? I didn’t realize that DH readers were the kind of forgiving bunch who might “accidentally” think this guy should get a second chance.
And now that his former friends have finally waded in on this horrific crime, we can all finally sleep at night. Please don’t forget to mention that police found maggots in the defendant’s SUV.
On what planet is the opinion of two formerly local mopes who, through blind happenstance, bumped into a potential murderer in his early twenties, worth printing? Perhaps the real insights might involve how his life unraveled after he was kicked out of his house as a teenager.
But no! That would actually take work! It’s much easier to cite his youthful drug use and criminal record as the obvious and inevitable basis for this kind of eminently predictable multiple homicide. Why, if only the DH was aware of this guy ahead of time, just like in the movie Minority Report, they could’ve prevented it from happening.
So now we can all breathe a sigh of relief and feel far better about ourselves because, by not managing to murder our children, we’ve gotta be far better than this guy.
Now, if you’ll excuse me, I’ve got to go interview the third cousin twice removed of the brother of the chauffeur who worked for Kourtney Kardashian in the mid 90’s. He lives right here in Maple Park and I’m sure he’ll provide the kind of fascinating family insights that no one else possibly could.

0 thoughts on “What happened to the local news? – part II”