Have I mentioned that a good political friend likes to say that whenever any red-blooded American runs for office, they immediately slough off 30 percent of their brain cells? Considering my own experiences with candidates (and one in particular), I’d actually put it a lot closer to two-thirds of ‘em.
While there are certainly those political hopefuls who are so nuts out of the gate that any intellectual descent would be difficult to discern, it’s amazing how normally rational adults lose their minds the minute they throw their hat in the ring. 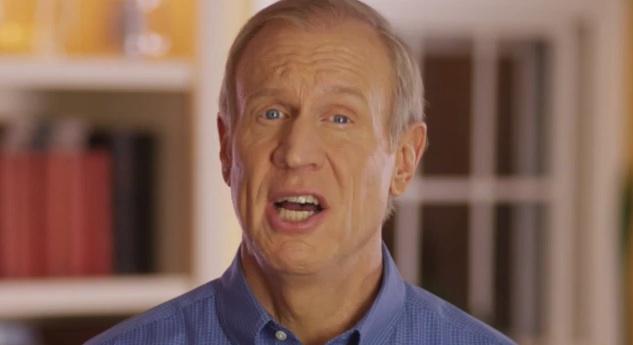 Much like it is with a multi-car crash, whenever one of these well-intentioned folks goes completely off the rails, you really don’t wanna look, but can’t keep your eyes off it either. And the current state of the Rauner campaign is a particularly perfect example of this phenomenon.
Beset by the slow Chinese water torture drip of the ongoing GTCR nursing home federal bankruptcy trial, Bruce’s people decided they needed to change the conversation.
The problem with their obfuscation theory is, you can only take advantage of the average voter’s short attention span if the story ain’t in the bleepin’ Tribune every single bleepin’ day. When faced with that kind of coverage, your only option is to face reporters head on, answer their questions, and do your damndest to put it to bed.
We all know that ain’t exactly Rauner’s forte. C’mon! This is the guy who barred some eager Columbia College journalism students from one of his press conferences.
So instead of taking that bull by the horns, those great Rauner campaign minds got together and decided to go Willie Horton on us by attacking a Quinn early release program in which a purported parolee shot and killed 9 year-old Chicagoan Antonio Smith.
The only problem with that contention was, it was actually the Illinois Department of Corrections who turned this guy loose after serving half of a 3.5 year gun-related sentence. And they used a state law that applies to all convicts who can earn time off for good behavior – not an early release program.
Not only that, but after correctly determining he’d have to appeal to moderate Democrats to prevail, I can’t figure out how Rauner thought the Horton tactic would help him. Republicans fall for it all the time, but they’re gonna vote for him anyway. Meanwhile, the vision of George H. W. Bush appealing to our lower angels still leaves a bad taste in many Dems’ mouths.
Even more baffling, in an effort to win black votes, the Rauner campaign resorted to the audio from a 1987 interview in which the late Harold Washington explains why he fired then Chicago Revenue Director Pat Quinn.
Oh lord! First, we’re talking about something that occurred 27 years ago. Second, Dan Hynes did the same thing during the 2010 Democratic gubernatorial primary only to have it blow up in his face. And most importantly, third, you have to believe Pat Quinn was competent to begin with for this to work. So in the end, Mayor Washington is only telling us something we already know.
Meanwhile, like legionnaires lost in the desert, Illinois voters are dying for a drop of sanity in a state that’s teetering on the edge of a fiscal abyss. But instead of hammering that message home and providing some sort of sentient solution, Rauner, like most Republicans, would rather attack his opponent instead.
And they aren’t even very good attacks!
When pressed by reporters for particulars, instead of providing details, Rauner loves to respond with “I’ve been successful at everything I’ve ever done!” Bruce! I hate to have to tell you this, but you’re about to find out exactly what failure feels like!

0 thoughts on “This ain’t a campaign, it’s a train wreck”