Considering campaigns will soon start heating up, the due diligence required to bring you the kind of stories the newspapers can’t handle, my business coach (Brian Basilico) is correctly kicking my ass to move forward with Forward Communication, and I desperately need to get my ‘So You Wanna Win a Local Election’ book out there, Quick Hit’s might be a little more sporadic going forward.

I may shift it to Tuesdays and Thursdays, and I’ll definitely be taking the week between Christmas and New Year’s off.

Meanwhile, please keep those stories coming! There’s a whole lot of you, but only one of me so I always appreciate your willingness to reach out.

With the above stipulation issued, I thought it would be fun to start with a purely positive piece.

Yesterday, former suburban Sun-Times reporter Matt Brennan and I were engaged in yet another interesting political discussion, when I asked him how his new book was doing.

You see, instead of bitching and whining about the downfall of local newspapers, Matt, who toiled for the Courier and Beacon-News at the same time I did, built a new career as a Marketing Copywriter. In that very regard, in May, he published a book called ‘Write Right – Sell Now, How to Create Content That Will Grow Your Business’ 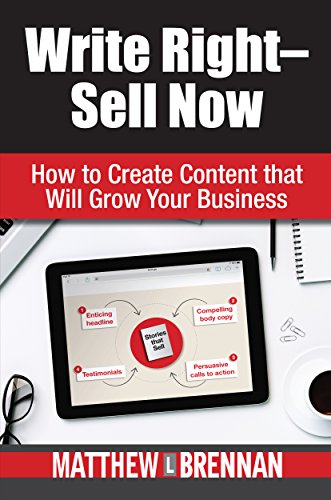 It’s a book I highly recommend to anyone who needs to get their Net messaging right – an often-daunting proposition. Please don’t mistake the fact it’s a short and easy read for a lack of pithiness, because that’s clearly not the case.

I forget the name of the astute writer who said this, but truer words than this were never spoken; “Oh! You want it short? That’ll cost you twice as much!”

“My business has also been going well,” Matt said, “Essentially, I help businesses and organizations tell stories that sell. Over the last year I’ve had an increase in technology clients, whether it’s some sort of app development, IT, or tech hardware.”

Please pick up a copy of his book, and here’s where you can find Matt if you need him!

Ain’t that the truth!

The opening spoken word line on N.E.R.D.’s first song off their current album, ‘No_One Ever Really Dies,’ is, “The truth will set you free, but first it will piss you off.”

So, yesterday I foolishly entered the Facebook fray regarding conservative Illinois State Rep and GOP gubernatorial candidate Jeanne Ives’ assertion that the U-46 School District needs to be broken up. She said some smaller districts needed to be consolidated as well.

I’m happy – and pleasantly surprised – to report that it was a generally civil debate, despite the fact that the always fascinating ultra-rightwing U-46 school board member, Jeanette Ward, openly supports Ives’ theory.

But all inspirational civility aside, I was confounded that I was the only one sitting squarely on the break it up side. It’s actually something I’ve fervently espoused since my family lived in Streamwood from 1991 to 1998.

But before we go there, let’s make a point of leaving the Chicago Public School system out of the mix. They’re an utter anomaly because the statutes governing Cook County bear no resemblance to what’s required of any other Illinois county. And CPS is a massive mess, too.

Back to the issue at hand!

U-46 regularly contends with 40,400 students, making it 41 percent bigger than the next largest school district, Rockford 205. And any time you can say “41 percent bigger” in regard to what’s ultimately a management quandary, it becomes a problem by default. There’s a reason no other Illinois district crosses the 30,000-student boundary.

Yes! CEO Tony Sanders does a great job, a caveat Larry Jones and I regularly repeated on the radio show. But we’re not always going to have Tony. Having to manage that many schools and that many students, by its inherently unwieldy nature, is going to be problematic for all but the top-of-the-line of CEO’s and superintendents.

Remember, we’ve all seen that not all leaders are created equal.

Look no further than former Superintendent Connie Neal and whomever had the gig when my family lived in Streamwood in the mid 90’s. The district essentially descended into the kind of civil war that I haven’t seen before or since. We moved to Geneva on the sole basis of being utterly unwilling to send our sons to U-46 schools.

Former Superintendent Jose Torres was certainly a vast improvement over Neal, but even someone of his great intellect had trouble holding it all together. Even though he certainly has the communications skillset, Tony Sanders does it by working the kind of hours that would kill most mortal men.

Because of the challenges that size brings, U-46 consistently runs the risk of hiring a CEO or superintendent who’s doomed to fail them. There’s a reason we four-wheelers can’t simply step up and drive a semi with that CDL license. Breaking up U-46 would go a long way towards mitigating this indisputable and unnecessary risk.

Not only that, but the needs of the students U-46 serves are so disparate, they’d be better served if it was split into three separate districts: