Only my dour, dreary and desperate German ancestors could come up with a word that literally means taking pleasure in other people’s pain. But even I have to admit that, when it comes to the Chicago Tribune Sportswriters’ utter inability to pick the winner of a Bears game, “schadenfreude” certainly describes my abject glee at their ego crushing track record. 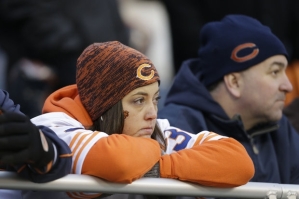 All seven sportswriters picked the Bears to win today which puts their dismal prognosticative proclivities at an incomprehensible 10 and 39.
And the truly tragic thing is, despite all seven of ’em being wrong, they were so fucking bad the last time we talked, with a current collective .256 winning percentage, they’re actually better than they were two weeks ago – by six scant points.
I gotta tell ya, if I’m Bruce Dold or Tony Hunter, fearful of my paper becoming an even bigger laughingstock than it already is, I pull the predictions for the rest of the season. But that’s just me. Meanwhile, if you want to get rich, all you have to do is bet against whatever these seven mopes mange to come up with.
And remember, Trestman and the Bears always get worse as the season progresses. Worse yet, the players are catching on to the fact he can’t coach in the NFL and what you’re witnessing is the the team slowly giving up on the rest of season. They know Marc Trestman’s firing is inevitable so why not make it happen sooner rather than later.
It’s utterly fascinating to watch the Sun-Times’ and Tribune’s race to the bottom. Considering how bad management is at both papers, there’s no way I’m betting on who gets there first.

0 thoughts on “It's only gonna get worse folks!”