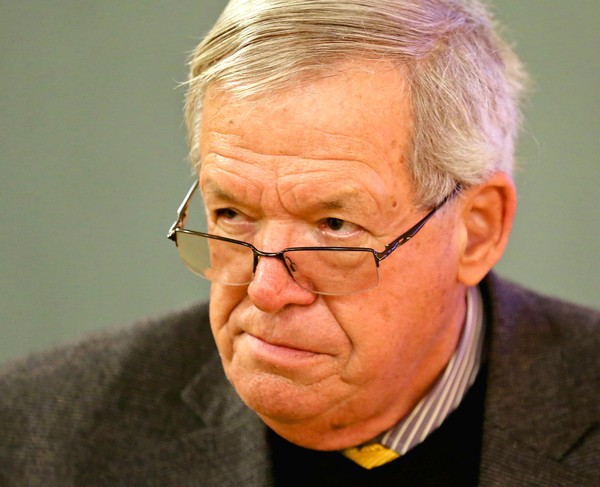 Is anyone even mildly surprised that the Chicago Tribune caught Denny Hastert with his hand in the cookie jar – again? Way back in 2009 we discussed the vast likelihood that the former speaker of the house was illegally conducting private business from his federally funded “retirement” office.
To review, though no one thrusts it upon them, former speakers are “entitled” to a five-year publicly funded office ostensibly for the purpose of tying up loose ends.
In 2009, we noted this public perk employed folks like former Hastert staffers Brad Hahn, Tom Jarmin and Bryan Harbin, at six figures a pop. Hahn described their job requirements as reviewing documents and mementos amassed during Hastert’s tenure, handling speech requests, and working with the Hastert Center at Wheaton College.
Call me crazy, but that sounds a lot like something an administrative assistant and a temp could handle without breaking a sweat.
The Tribune also noted that Hastert rented the original office space from a firm partly owned by the sons of his political sponsor, Dallas Ingemunsen, to the taxpayer tune of $240,000. The monthly freight was a hefty $6,300 until the press caught on and it mysteriously dropped to $400 in early 2011.
Sadly, the widely reported $21,364 vehicle leased from political supporter and car dealer Olaf Gjovik seems hardly worth mentioning. But if you do take the time to add it all up, that federally funded largesse will cost taxpayers a cool $1.9 million.
And let’s not forget, per that infamous 2011 60 Minutes segment, our former “aw shucks” high school wrestling coach’s net worth shot from $300,000 to around $6 million during his political tenure and he currently receives three separate government pensions totaling $106,000 year.
Hastert maintains he never misused the office, but apparently one should never underestimate the fury of a businessman scorned. Court records indicate that former business partner David John produced dozens of emails (six of which he made public in his lawsuit against Wheaton College) between himself and Hastert’s publicly funded secretary covering various private ventures such as a California racetrack.
It’s not so much what he so obviously did that bothers me, but if you’re going to be deceitful, the least you can do is make the minimum effort to avoid getting caught. Hastert’s utter contempt for the American taxpayer has become the stuff of legend.
You’re probably tired of hearing me say it and I’m just as tired of having to say it, but where’s the outcry from all those fiscally conservative Republicans and Tea Partiers I’ve been hearing so much about?
While you’re at it, please name just one of Speaker Hastert’s fiscal accomplishments. I’ll wait… So what’s worse? A tax and spend Democrat or a tax and spend Republican?
Perhaps some of you are so busy shrieking “socialism,” radical” and “entitlements” at the President that you don’t have time for anything else. Or maybe it’s just that Denny gets a pass because he’s such a good ole boy.
Ah! But since I’m imbued with the holiday spirit, I’m willing to stipulate that your silence is the result of chalking the former speaker’s political self-enrichment schemes up to inevitable fate.
That doesn’t mean I’m letting you off the hook.
So let’s move past the sad Hastert saga and drill down to the bedrock of my, it’s only OK if Republicans do it theory. And let’s make it a little more local.
Please tell me why, Kendall County, that hallowed bastion of all things GOP and the home of Speaker Hastert, suddenly becomes so liberal when it comes to taxation? Only Lake County hits their Illinois residents any harder and, of the 3,033 U.S. counties, it’s Kendall Countians who have earned the ignominious privilege of paying the 24th highest taxes in the nation.
Despite a history of electing virtually only Republicans – you know, those fiscally conservative folks – that puts them in the top1 percent of Illinois and U.S. taxpayers.
Ironic isn’t it? As that insipid Dr. Phil might say, “How’s that whole GOP thing workin’ out for ya?” I’ll wait for all those letters-to-the-editor explaining this oxymoron with baited breath.
While so many of you insist upon railing at our “socialist” President, as Mitt Romney so aptly noted, a plurality of folks don’t pay any income tax at all. It’s the local taxing bodies that keep picking your pocket.
Fail to pay the IRS and you can work out some kind of settlement. But you better come up with that bi-annual property tax check or they’ll sell your house right out from under you.
But finally bucking tradition, Kendall County now boasts two openly Democratic county board members (I almost said gay!). And as a good Yorkville friend just put it, “Maybe we’ll finally get a tax reprieve and some good fiscal management.”