…Who the heck’d want one?

Though I will say the fact that the Daily Herald signed off on Kane County Chairman Chris Lauzen’s reelection bid had me seriously contemplating the possibility of parallel Universes. But once I actually read the endorsement, I realized there had been no such quantum shift.

Holy crap! First, they called the Chairman “a polarizing figure.” Really? Because if Mr. Trebek provided the following list:

My question would be, “What are polarizing Kane County politicians, Alex!” It would seem it’s a prerequisite to run here, but at least Lauzen tends to get things done – which the DH bizarrely admitted at the end of the piece.

They also called former KC Animal Control Director Rob Sauceda a “disaster,” which ain’t even close to the truth. Before his “mistake,” Sauceda returned that department to fiscal stability, something Karen McConnaughay’s hand-picked directors could never do. But the DH never managed to pick up on them, did they?

Then, in a most magnificent irony, they chided Lauzen for his obsession with the Coroner as they launched into yet another tirade about Kane County Connects. C’mon guys! Talk about obsessions! When are you gonna let go of an electronic newsletter run by one guy? Is it really that bad over at the DH?

The only DH obsession that’s harder to explain is their abject disgust, dismay, and despondency with anything that has anything to do with Chris Lauzen. It musta killed them to have to issue that left-handed endorsement.

Had they actually meant to be self-deprecating, it would’ve been hilarious, but we all know that Mr. Slusher’s super-serious ego would never allow that kind of thing to happen.

But it wasn’t all bad

Because the tone of that endorsement was something you don’t typically see from the Daily Herald. It was light, humorous, well-written, somewhat satirical, and even entertaining. I can’t help but think what would happen if the DH Editorial Board applied that kind of effort on a daily basis.

So while they certainly had their way with Chairman Lauzen, they had some fun with his opponent too!

The DH aptly noted that, while Shepro slammed Lauzen for freezing the tax levy, he  immediately said he’d keep it in place. Then they slammed the white Don King for his disastrous role in the debacle known as the Fox River and Countryside Fire/Rescue District.

(Of course, they got that story from TheFirstWard.Net and Left, Right and You, but considering the photographs I’ve appropriated, we’re good!)

Far more often than not, the DH’s writing style is the perfect cure for insomnia, so here’s to hoping they resort to that endorsement style a little more often.

But just when I think there’s hope, the DH dashes it faster than Beyonce can aggravate oblivious middle-aged white folks. How on God’s green earth can anyone endorse a candidate that:

Because when you do endorse someone like Rob Russell, or any candidate with that kind of track record, you lose all credibility. 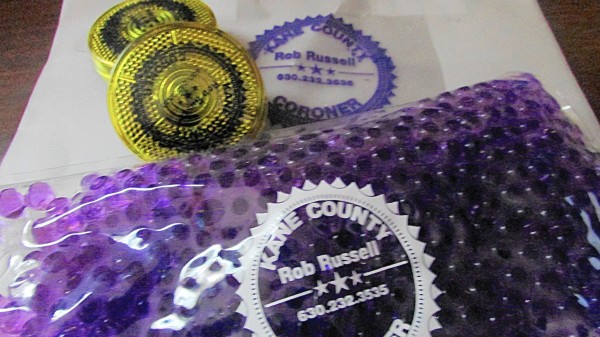 Give it up guys!

I’ve taken so many calls from candidates complaining about…

…the DH really oughtta hire me as their publicist because I simply told those ten to twenty hopefuls there was nothing nefarious here. It’s just that, in their current depleted state, the DH did what can only be called a very unprofessional job.

But despite those obvious shortcomings, they keep doing endorsements out of ego – it’s the only way they can get politicians to be at their beck a call. They know that one hour interviews with multiple candidates aren’t nearly enough to form any kind of reasonable opinion, but they do it anyway.

And what would the DH do to any public or private entity that performed a job this poorly?