The GEA is still quite tone deaf!

I certainly understood the late, great philosopher Tom Petty when he mused, “Listen, it don’t really matter to me, you believe what you want to believe,” but that doesn’t mean the capacity to reject reality and substitute your own in the face of a mountain of evidence to the contrary ever ceases to amaze me.

It’s in that very vein that Donald Trump ain’t got nuthin’ on the Geneva Education Association’s peculiar propensity to engage in almost mythical flights of fancy. 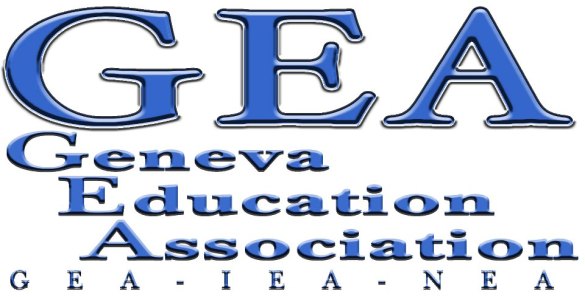 Still somehow believing those Geneva Township voters are 100 percent behind them, despite the radioactive fallout from a more than contentious strike, the D304 teachers’ union proudly announced its school board endorsements on Monday.

And it’s gonna be the electoral kiss of death for:

Because the only way this trio got the nod is by convincing the GEA that the 5 percent annual raises our teachers recently received weren’t nearly enough. These are the candidates who clearly want to raise our already beyond absurd property taxes even more.

And that’s especially frightening when you consider how vastly pro-union some of the other hopefuls are!

Though it won’t make much difference to the rabble, before you go after me again, please remember that my wife is a D131 middle school teacher who, like most educators, deserves far more than she gets. And that sentiment certainly doesn’t put me in any sort of anti-teacher camp.

But by embracing my keen perception of the obvious, I know that’s not going to happen until Illinois decouples education funding from property taxes. The Collar Counties are already paying some of the highest tax bills in the country and we’re simply tapped out.

And now is exactly the time to make that decoupling a reality, too! Illinois has a new progressive Democratic Governor who enjoys the kind of Springfield supermajorities that mean all sorts of interesting things can happen.

The problem is, the union can’t be bothered with addressing the real issue. Instead of working to fix this broken system once and for all, the GEA and the teachers’ immense sense of entitlement demands that they keep coming back to us for more money, and in a fit of pique, punish those scurrilous sitting school board members by attempting to get more teacher-sympathetic candidates elected.

As I’ve suspected all along, it isn’t all about the children and so what if senior citizens are taxed out of their homes?

The irony is, if the GEA collectively had half a brain, they would’ve seen the voter handwriting on the chalkboard and endorsed the three candidates they DO NOT want to see elected. That would’ve been a stroke of political genius.

Meanwhile, were I one of the six who did not receive the GEA’s blessing, you better believe I’d put “Proudly NOT endorsed by the GEA” on every piece of campaign literature going forward.

I thought the flirty napkins were fun!

Though that, once again, puts me smack dab in the middle of yet another minority who actually happen to have a sense of humor.

In a effort to make a bleepin’ miserable experience a little less miserable, Delta Airlines and Coca-Cola got together to print the napkin depicted in the photo below: 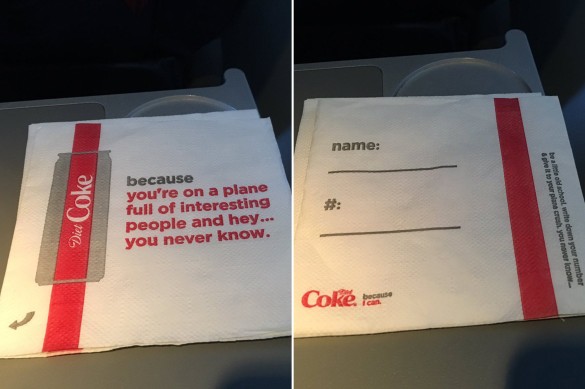 Call me crazy, but I thought encouraging folks to pass their phone number along to their “plane crush” was the kind of lighthearted fun that would make us all smile just a little bit more. And that’s especially true when you consider that I’d rather enjoy a week’s worth of colonoscopies than ever darken an airport door or a 727 cabin again.

But no! Those delicate flowers who always know what’s best for the rest of us just have to rip the still-beating heart out of any potential joy we might encounter.

One particularly aggrieved female Tweeter said the napkins were “creepy and unwelcome,” while another declared, “Pretty sure no one appreciated unsolicited phone numbers in the ‘good old days’ and they sure as heck don’t want the number of someone who has been gawking at them on a plane for hours today.”

Somebody’s pretty damn sure of themselves, aren’t they?

The last thing I want to do while flying is “gawk!” My plan is to close my eyes, put on some Modest Mouse, and do my best to completely ignore the fact that we’re hurtling through the always bumpy upper reaches of the atmosphere at 600 mph as those surly sky waitresses overserve my inflight compatriots while we put our fate in the hands of an unseen pilot who hopefully wasn’t served with divorce papers that morning and won’t get food poisoning midway through the flight.

So what if someone provides you with their phone number in any venue short of a convent? If the flirtation begins and ends there, it’s not a #MeToo moment. “Unwanted advances” can only occur when someone won’t take “no” for an answer.

Thankfully, after Coke and Delta pulled the napkins as a result of that bizarre backlash, some fliers proved that, just like an American Express card, you should never leave home without your sense of humor. Here are some of their similarly humorous Tweets:

The napkins are fine. I’m 57 years old and don’t understand why your perfectly appropriate attempt to get people to actually interact with each other outside of their phones is viewed by #snowflakes as #creepynapkins Explaining is great but please don’t apologize.

Then a young woman said this:

Thanks @CocaCola and @Delta, for encouraging people to TALK to one another, make new friends, or do anything besides stare mindlessly at phones. But don’t you know it’s practically illegal to flirt these days? Sad world, but nice try & not #creepy

A young man Tweeted this:

DELTA AND COKE JUST APOLOGIZED FOR DAMN NAPKINS BECAUSE FLIRTING IS NO LONGER ALLOWED. EVERYONE IS LOSING THEIR DAMN MINDS

And my personal favorite:

I just met you, and this is crazy
But here’s my napkin
So call me maybe!

That one made me laugh out loud!

All I can say is, I’m gonna go right out and buy a couple cases of Vanilla Coke Zero at Meijer, and the next time I fly, it’s gonna be on Delta.