Caught between the Scylla and Charybdis

But before we continue, if those Chicago Tribune reporters are reasonably accurate, given their coverage of this pathetic prosecution effort, the team of McMahon, Cullen, Gleason, et al shouldn’t have stopped at 13- to 14-hour preparation days.

Is this really the best they can do?

My original fallout theory was, should McMahon lose this case, every Chicago activist will want his head on a silver platter. Conversely, should he prevail, his relationship with law enforcement will be permanently damaged to the point that he’ll be a less effective state’s attorney than he already is. 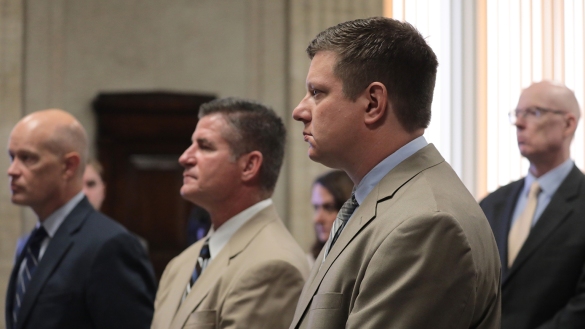 But, like I said, my friend came up with another possibility. His hypothesis was that McMahon and his team would likely suffer both fates, and I think he’s right!

McMahon and company’s first hard-to-fathom mistake was pursuing a first-degree murder charge. It may be true that Van Dyke and most of his CPD compatriots are no better than the thugs they arrest, but he clearly didn’t wake up that day thinking, “I’m gonna shoot Laquan McDonald 16 times!”

Without that kind of premeditation, it ain’t first-degree murder.

So, despite their mediocre trial effort, unless McMahon goes for broke, which would be a really bad idea, the jury will likely convict Van Dyke of a lesser charge which means the worst of both worlds.

With their expectations sky high, those Second City activists won’t settle for anything less than the whole enchilada, while law enforcement won’t be happy with any kind of conviction. As that great philosopher Warren Zevon said, “Send lawyers, guns and money. The shit has hit the fan!”

So, who needs to expose McMahon’s vast administrative and political shortcomings when he’s more than happy to do it himself? How that man dresses himself in the morning is beyond me.

My good friend and scurrilous Cardinal fan, Bill Wright, PM’d me this morning to ask if I required a shoulder to cry on regarding the Cubs’ quick playoff exit. Perhaps that would’ve been the case in previous seasons, but not this time.

You see, not only did I fail to watch last night’s wildcard game, but the loss to the Colorado Rockies is exactly what I was praying for. Insiders recently told me that, in great part due to allowing closer Pedro Stop injure himself on the base paths, Cubs’ GM Theo Epstein is not at all amused by the worst manager in the Major Leagues. And since I’m convinced the Cubs will never win another pennant with Maddon at the helm, it’s better to cut bait now.

Yes! Maddon was the perfect manager for a young team facing 108 years of despair and desperation, but all his cute gimmicks and beyond bullshit baseball won’t work with multi-million-dollar veteran players, and the Cubs’ precipitous fall from that championship season is all the proof you really need.

I don’t care if the Cubs win 120 games, if you don’t make it back to the Series, then you’re no better than the 100 loss White Sox. Nobody remembers the wild card teams and nobody wants to be the White Sox.

Further proof of Maddon’s bizarre ego and inability to take responsibility for his failures include, but are not nearly limited to his:

After he retired, Orioles Hall of Fame Jim Palmer admitted he’d never have been the pitcher he was if the great Earl Weaver hadn’t regular kicked his ass. Weaver wouldn’t let Palmer sink into the morass of his own doubts.

Jon Lester can’t throw to first base? What kind of fucking bullshit? I saw analyst David DeJesus’ nine-year-old daughter through a strike to home plate!

The late great five-time Yankee manager Billy Martin may have taken it a bit too far – on and off the field – but his former players conceded that they were terrified of losing, and there ain’t nuthin’ wrong with that. You may not be able to install a winning mindset in a player who doesn’t have one, but you can certainly use fear as a weapon with everyone!

Look at what the Brewers did with perennial all-star Corey Knebel. When he couldn’t right the mental ship, they sent his ass down to the minors despite his $4 million salary. And when he came back up, he was lights out!

Apparently, there’s something about long, hot bus trips that can make a player think twice about sucking.

When opposing managers started using shifts against the Splendid Splinter, Ted Williams simply bunted to the left side of the diamond until they were forced to stop. Fuck launch angles! Rizzo, Schwarber, Bryant, and Heyward need to learn how to use the entire field. Thirty-seven year-old Ben Zobrist gave up some power this year, but he batted .305 with a .378 on-base percentage because, as the great Wee Willie Keeler suggested, he “hit ‘em where they ain’t.
So, while the Cubs still have a winning nucleus under team control, it’s time to let Maddon go to another foolish unsuspecting team and hire a manager who actually knows how to win. My choice would be former Cubs catcher David Ross who won’t take any shit.

Where’s Whitey Herzog when you really need him?

No Quick Hits Friday or Monday

Since I desperately need a break from writing, unless I’m truly inspired, I’m taking a long Columbus Day weekend. Quick Hits will be back on the 10th.