As the great Nicholas Tremulus once intoned!

Of the 1,500 Aurora City Council inauguration attendees, guess who made the Channel 7 news as he was getting his picture taken with new Mayor Richard Irvin?

That’s right! The old, bald, white guy from Geneva! Apparently, being gorgeous has it’s upside and I do want to thank Gilberts Mayor Rick Zirk for capturing this moment for posterity.

Autographs start at $100 a pop and if the women would refrain from ripping my clothes off, it would be appreciated!

Trust me! I understand why the Congressional Obamacare repeal vote has all of your knickers in a twist. After all, killing people off in the name of billionaire tax cuts ain’t exactly the most Christian endeavor. But what my liberal compatriots don’t seem to pick up on is the concept of two steps forward and one step back.

Considering the level of national bigotry and his capacity to be ineffectual when it really mattered, what made you think there wasn’t going to be some sort equal and opposite reaction to our first black president? 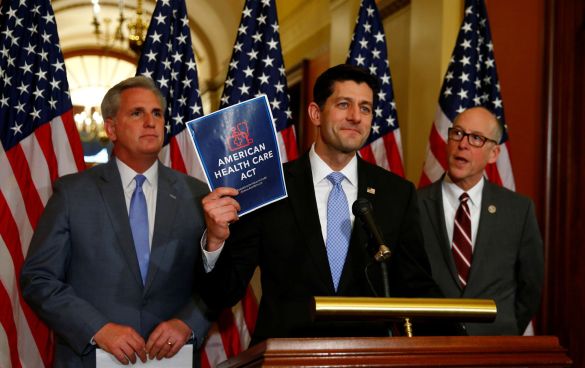 The fascinating Trump presidency has finally fired up liberals to the point where they’re getting involved in a rational manner. We’re already seeing how difficult it is for Republicans to hold their seats. The chickens of pandering to their base are finally coming home to roost.

So unless something really strange happens, the inevitable 2018 mid-term backlash is gonna be one for the ages. And every time Trump does something stupid, it’s gets that much worse for Republicans.

Of course, the Senate, fearing for their political lives, stopped the ACA repeal dead in its tracks and it will be fascinating to see what alternative they manage to come up with. But if Trumpcare does survive, it will destroy any and all 2018 GOP hopes. Why? Because the states with the highest ACA enrollment are the ones who went for Trump!

We’ve all learned that no one can convince Trump supporters with the facts, but when the President’s policies start causing them pain, the shrieking, howling and mind changing will commence.

To make matters much worse for our red state brothers and sisters, they’re the biggest consumers of food stamps, they have more preexisting conditions and the Trump tax cuts will kill the massive subsidies they get from the richer blue states. It’s going to be a lot of fun to watch.

Yes! You are correct! Trump could end it all with the mere press of a button, but then we wouldn’t have worry about him anymore, would we?

So liberals! Please take a deep breath, pour yourself a glass of pinot noir, put on some Chain Smokers and apply some badly needed perspective. If there’s one thing you can count on in this existence, it’s the pendulum swinging back.

I’m not saying you should let go of your newfound momentum. By all means, keep calling your Congressmen to tell them how you feel. It’s just that you don’t want to let your outrage mobilize the other side. There are times when the best course of action is to let some folks hang themselves.

I know I keep picking on that insipid paper, but they make it so easy it’s hard to stop! To wit, reporter Harry Hitzeman either got something completely wrong or he outright lied.

Not that one is necessarily better than the other.

Getting back to the Daniel Rak murder prosecution! When a Kane County judge wasn’t too busy bullying female public defenders, he was considering whether the State’s Attorney’s “accidental” acquisition of privileged PD emails meant that case should be tossed.

In his already stilted coverage of the case, Hitzeman wrote, “A forensic computer expert corroborated Lang’s [an assistant prosecutor] testimony that the emails were never shared.”

NO HE DIDN’T! And you know it, dear readers, because you read it right here!

What the forensic expert actually said was, “Although this does not conclusively rule out that the PD emails had been reviewed…” That isn’t corroboration, that’s a bleepin’ guess. The expert went on to say. “If those files had been reviewed, saved and/or printed, there is a reasonable likelihood that the process of doing so would have left forensic residue…”

And my initial blog response was, “Yeah! And there’s a reasonable likelihood that my wife is gonna kick my sorry ass out any day now, but it never seems to happen!”

Silly me! I thought the murder trial standard was “beyond any reasonable doubt,” not, “What the heck? I think we’re good!”

Harry, everyone knows you’re just a shill for State’s Attorney Joe McMahon, but even I didn’t think you’d stoop to this kind of fake news. I guess I was wrong!

Congratulations to Annette Johnson for retaining her D131 School Board President title by a close 4 to 3 vote. Though Annette shares my capacity to be cantankerous, I’ve never doubted her love for that often difficult East Aurora District. No one should ever underestimate that rare politician with a keen perception of the obvious

I also want to congratulate new West Aurora School Board member Christopher Sparks. The fact that any candidate who wants to serve on a school board should automatically be disqualified notwithstanding, I was impressed when I met Chris while canvassing for North Aurora Trustee Tao Martinez. Good luck sir!

Lastly, I want to offer my condolences to the family of Jamie Daniel and to all Genevans for our collective loss. Ms. Daniel, a preservationist, businesswoman and architectural connoisseur passed away at the age of 95 last week.

Ms. Daniel was involved in the League of Women Voters and the PTA. She was one of the first board members for the Landmarks Preservation Council of Illinois, the Riverfront Park Committee and she was a member of the Geneva Chamber of Commerce. She also founded Miscella Realty in 1977.

In lieu of a funeral, there will be a memorial service May 20 at 1 p.m. at the Geneva History Museum.

If you believe some local school administrators and teachers, the arrival of spinners, or fidget toys, will bring our entire educational system, and perhaps even Western civilization, crashing down upon us. Why, some districts have gone as far as banning the heinous devices for safety reasons!

Safety of whom? The egos of folks who don’t want to have to compete with a simple toy? But before I aggravate you any further, please allow me issue some stipulations first.

Let’s start with the fact that classroom toy crazes are nothing new and none of them have done irreparable harm. In my 1970 sixth-grade Evanston St. Nick’s classroom, it was TV Magic Cards. In the 90’s it was Tomagotchi virtual pets. In the noughties it was Pokemon Cards. Now it’s spinners.

In the immortal words of that great philosopher Gloria Gaynor, “We will survive.”

And yes! There certainly is a fad element to fidget toys which can cause some classroom confusion. Despite what school districts try to tell the parents of boys, not everyone of them has ADHD.

Third, being a teacher – as my lovely and longsuffering wife currently is –  is already difficult enough. Dealing with a classroom full of not-so-eager middle schoolers as  they’re distracted by a bright, shiny object sounds a lot like Dante’s twenty-third circle of hell.

But those eminently evenhanded provisions in no way absolve these school districts from not only failing to understand the real lesson here, but issuing the kind of response that makes these toys more popular than ever.

I’ve been saying it in my columns for years!

Elementary, middle and high school classrooms are set up for girls to succeed and for boys to fail. And the raging Ritalin epidemic is all the proof anyone really needs. A whopping 20 bleeping percent of high school boys have been diagnosed with ADHD while only 10 percent of their female counterparts are similarly labelled.

Furthermore, the anti-boy education statistics cited in this Time article by “The War Against Boys” author, Christina Hoff Summers, are truly terrifying and they’re getting worse every day.  In her book, Ms. Summers correctly argues that a “misguided feminism is harming our young men.” 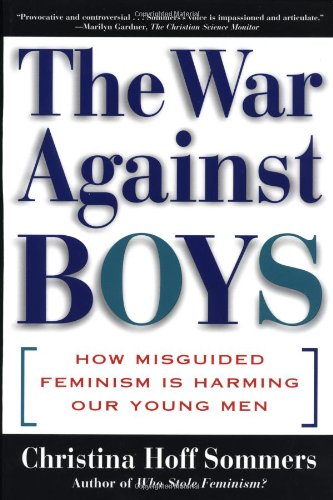 So we’re faced with two possible conclusions. Either boys are defective or our school system is. And I’m fervently hoping I’m not the only one armed with a keen perception of the obvious. It wasn’t until my sophomore year at Loyola University that I finally realized I wasn’t the problem.

And, as usual, the minds of the folks charged with shaping young minds are set in stone.

Instead of embracing spinners and making them an interesting part of the curriculum, i.e., the economics of trading fidget toys, administrators ban them. Instead of learning from boys who desperately want to “heal” themselves in the face of an impossible standard, teachers refuse to get the message. Instead of questioning a system that’s based on a long-gone, low-noise, slower agrarian culture, superintendents do what they’ve always done because they’ve always done it.

You see, the truth is, administrators and teachers kinda like having the ultimate classroom control. Teaching boys kinetically not only means a massive mindset change, but a lot more effort too. It’s much easier to demand that boys be quiet and pay attention, and then administer the kind of discipline that sends them into a deep despair when they don’t.

Though I know very few will, every teacher within the sound of my voice should read “The War Against Boys.” C’mon! Even doctors have to raise their right hand and say “First, I will do no harm” before grabbing a scalpel.

As the wisdom of boys would suggest, spinners, correctly applied, are a not a bad thing.

I’ll talk a lot more about this on Monday’s podcast.

Having conquered the technology, future podcasts will include interviews and co-hosts. I can’t wait! Until then…