The short-term verdict may be in, but just like those ripples that fan out when you throw a stone into a deep, still pond, the lasting repercussions of the Ferguson debacle are only just starting to be felt.

As important as it will likely turn out to be, this inevitable incident was the culmination of years of trying to put a lid on a problem instead of making an effort to mitigate it. And that’s always a recipe for disaster because this is a tale of the people charged with protecting us falling prey to fear and hate and then doing just the opposite. 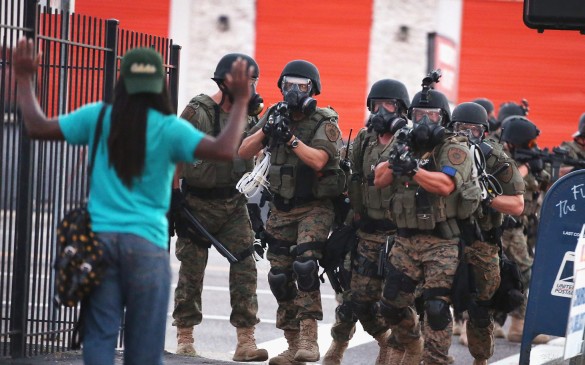 The sad truth is, without diminishing it in any way, this story is about so much more than the death of Michael Brown which, ironically, will serve to give his too-short life far more meaning than it might’ve otherwise had.

Please allow me to explain:

The U. S. Attorney’s office has made it clear that they will be examining every aspect of the Ferguson Police Department from a civil rights perspective. Given their consistent poor judgment and the unforgettable images of a white American police force as an occupying army, the federal folks will make it a point to make an example of Ferguson, Missouri.

It certainly won’t happen overnight, but I wouldn’t rule out a federal takeover of that police department.

2. But Darren Wilson’s and Police Chief Thomas Jackson’s careers are over

Human nature dictates that, rather than examine our own role in a sad series of events, we’d rather search for scapegoats instead.

Wilson was nothing more than a cog in a machine that became far bigger than any of its component parts. The problem is, whether we like it or not, innocent or guilty, sometimes we have history thrust upon us. The Ferguson Police Department will not be able to recover as long as he’s there so, under the guise of a resignation, Wilson will be gone.

Ah! But if someone is more culpable than their minions it has to be the Chief. Throw in his capacity to make blisteringly bad decisions, and his departure is as foregone a conclusion as I’ve ever seen.

3. The police will demilitarize

In fact, many of them are already attempting to return their MRAPs and other surplus equipment to the Pentagon, though it appears to be a virtually impossible feat.

Author Radley Balko was indeed prophetic when he warned us that, once police acquired that weaponry, they would put it to use. And given the general lack of any internal terrorist threat, they would likely use it against the very people they’ve sworn to protect.

So now, police chiefs, mayors, and even school districts, terrified of the monster they so eagerly created but can’t control, are trying to divest themselves of these “tools” and the temptation that comes along with having them as fast as they possibly can.

The slightest possibility of a Ferguson repeat in their jurisdiction is keeping them wide awake at night so, thankfully, the militarization tide has turned. The police should always be an extension of the people and not the military.

4. A comeback for Constitutional rights

As is almost always the case when tragedy strikes this country (except for school shootings, of course) the pendulum starts moving towards one or the other extreme. A perfect example of this phenomenon is our post 9/11 fright fest which made matters much worse than the actual attack itself.

Our clarion call seemed to be, “We will protect our freedom by destroying our freedoms!,” and suddenly the police were the beneficiaries of all sorts of new authority. But whenever one group gains that kind of leverage at the expense of another, it never works out because, without the necessary checks and balances, the suddenly more powerful faction typically turns on the very people who provided that new authority in the first place.

So now, especially in light of Ferguson, that slow erosion of our constitutional rights will start to reverse.

5. Police departments will make more of an effort to hire minorities

In order for Democracy to truly flourish, the people who purport to represent us or act on our behalf should actually well…represent us! We humans tend to be tribal by nature and, left to our own monochromatic devices, we quickly descend into an us versus them bunker mentality. But that’s far less likely to happen when you regularly work alongside people of color.

Not only that, but unless you’ve walked that proverbial mile in those Hispanic or black shoes, you can’t possibly understand their experience. When you combine that lack of empathy with a military mindset and the inherent imbalance of the police/citizen relationship, something like Ferguson, Missouri was bound to happen.

And please don’t give me that, “Do municipal snowplow drivers have to look like us too?” bleep because I can’t remember the last time a snowplow driver pulled anyone over or pointed a gun at me.

The best police chiefs know that the best defense against this dire dynamic is a police force that mirrors the community they serve.

6. Community policing is the only thing that really works

The police can’t possibly resolve the underlying inequities that lead to so many of our social ills because no single group wields that kind of power. That’s gonna take all of us. But with that synthesis still pretty far off on the horizon, the next best thing is to engage your citizenry because it’s much more difficult to be adversarial with someone who’s part of the process.

The problem police departments generally have with that interesting notion is that it levels the playing field which can be a nerve wracking proposition.

But it works and the folks in Kane County, Illinois need look no further than the Sheriff and the Aurora and Elgin police departments for proof beyond a reasonable doubt. Sheriff Pat Perez and Chiefs Greg Thomas and Jeff Swoboda (respectively) have had amazing success in getting their constituents to buy into that fascinating form of partnership.

In fact, it’s worked so well in Aurora that Illinois’ second largest city didn’t have a single murder in 2013! Of course, some of that’s luck and some of it’s the capacity to keep the really bad guys off the street, but, in a city of over 200,000, most of it should be credited to community policing.

But the best thing about that effort is, as Kane County State’s Attorney Joe McMahon regularly reminds us, when you’re engaged, the possibility of redemption is exponentially greater and redemption actually solves the problem. It’s much harder to dismiss your brothers and sisters when you’ve made the effort to look them in the eye.

5 thoughts on “The fallout from Ferguson”